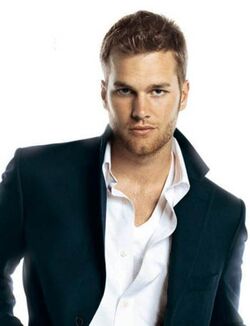 Tom Brady is an American football quarterback for the New England Patriots of the National Football League. He has won three Super Bowls with the team and is, without a question, a future inductee to the Football Hall of Fame.

Brady has two sons, one with actress Bridget Moynahan, and one with his wife, supermodel Gisele Bündchen, with whom he was married in 2009. 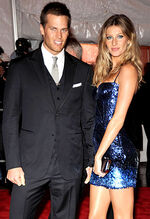 After playing college football for the University of Michigan, Brady was drafted by the Patriots in the sixth round of the 2000 NFL Draft. Since then, he has played in four Super Bowls, winning three of them and earning MVP honors in two. He has been selected to the Pro Bowl seven times (but didn't attend in 2006) and won the NFL MVP award twice (2007 and 2010). He is the only player along with Joe Montana to win NFL MVP and Super Bowl MVP multiple times each.

Brady has the 5th highest passing rating of all time (95.2) among quarterbacks with at least 1,500 career passing attempts. Needless to say, he holds many records, including the most touchdown passes in a single regular season (50), a 14-5 post-season record, and the longest consecutive win streak (21 games over two seasons) in NFL history. Visit his Wikipedia page for more information on his career and records. 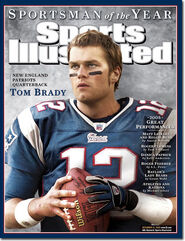 SI Sportsman of the Year Cover 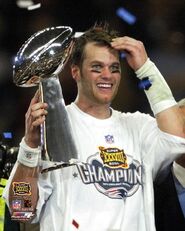 With the Super Bowl Trophy 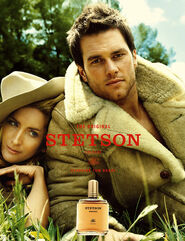 In an advertisement for Stetson 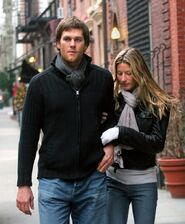 Out for lunch with Gisele 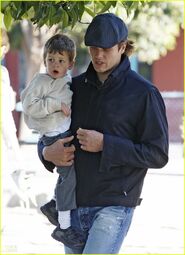 With his son John 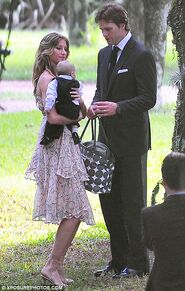 With Gisele and son Benjamin at a wedding
Add a photo to this gallery
Retrieved from "https://wags.fandom.com/wiki/Tom_Brady?oldid=4145"
Community content is available under CC-BY-SA unless otherwise noted.