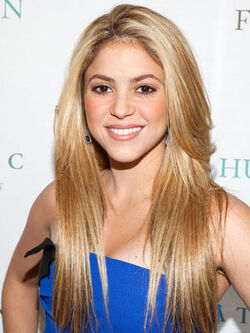 Shakira (born Shakira Isabel Mebarak Ripoll), is a Colombian singer-songwriter, dancer, record producer, choreographer and model who emerged in the music scene of Colombia and Latin America in the early 1990s. Born and raised in Barranquilla, Shakira began performing in school, demonstrating her vocal ability with rock and roll, Latin and Arabic influences with her own original twist on belly dancing. Shakira is a native Spanish speaker who speaks fluent English and Portuguese, as well as some Italian, French, and Catalan.

In March 2011, Shakira confirmed her relationship with Barcelona FC footballer Gerard Piqué on Twitter and Facebook. In 2012, they announced that they would be having a child together.

Retrieved from "https://wags.fandom.com/wiki/Shakira?oldid=4366"
Community content is available under CC-BY-SA unless otherwise noted.