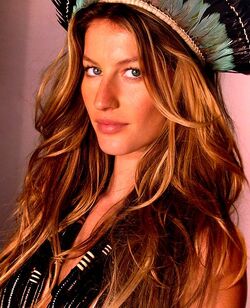 Gisele Bündchen is the world's most famous and successful supermodel. She arrived on the scene with a surge of Brazilian models in the late 1990s, after which she gained international recognition as a Victoria's Secret Angel from 2000-2006. Gisele is now the highest paid supermodel in the world and the 16th richest woman in the entertainment industry. She married NFL Quarterback Tom Brady in 2009, with whom she has a son.

Gisele was born to a bank clerk pensioner mother and a professor/writer father in Três de Maio, Brazil. She is of German-Brazilian descent and grew up in Horizontina, Brazil wanting to play professional volleyball. She is Roman Catholic, speaks Portuguese, Spanish, and English, and has five sisters - Raquel, Graziela, Gabriela, Rafaela and her fraternal twin Patrícia. Gisele was so thin as a kid that her friends called her "Oli/Olivia Palito" (the Portuguese name for Popeye's skinny girlfriend) and "Saracura" (a type of bird in Brazil).

At age 13, Gisele began modeling with her sisters. A year later, she was discovered by a modeling agency while eating McDonald's at a shopping mall in São Paulo during a field trip to the big city. Subsequently, she placed second in the national Elite Look of the Year contest (after Claudia Menezes), and then took 4th at the world competition. At age 16, Gisele moved to New York City, debuted at Fashion Week, and the rest is history.

In 2004, Gisele played the leader of a bank robber crew in the movie Taxi. In 2006, she played a minor character in the fashion-based film The Devil Wears Prada.

Gisele started dating New England Patriots Quarterback Tom Brady of the NFL in late 2006. During 2007 and 2008, they turned many heads at events all over the world, becoming perhaps the most famous and most attractive Athlete/WAG pair, certainly in the United States.

On February 26th, 2009, the couple got married at the St. Monica Catholic Church in Santa Monica, California. On April 5th, a couple months later, they had a larger ceremony in Costa Rica, at which Brady's son (with actress Bridget Moynahan) John was present. For this second wedding, Gisele wore a classic dress and veil by John Galliano. In June, reports surfaced that Gisele was pregnant, which were confirmed by Brady to ESPN in September [1].

On Decemeber 8th, 2009, Gisele gave birth to her first child, Benjamin Rein Brady (named Rein after her grandfather Reinaldo). He was born in Boston and baptized in 6 months later in Santa Monica.

Gisele is virtually unimpeachable in the tabloids. She has a vast portfolio of charity work and likes to avoid the press, which leaves her squaky clean.

The only time she stirred up controversy was when she told Harper's Bazaar Magazine that she thinks breastfeeding should be a worldwide law. She later moderated her statement by saying that her only intention was to make a personal comment about the importance of breastfeeding. [2] 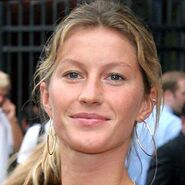 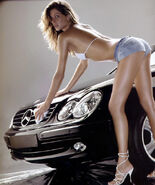 Retrieved from "https://wags.fandom.com/wiki/Gisele_B%C3%BCndchen?oldid=4405"
Community content is available under CC-BY-SA unless otherwise noted.